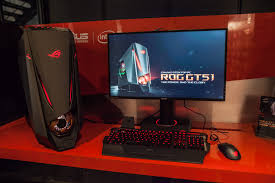 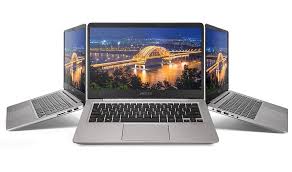 Here are the ROG laptops with the 10th Gen Intel Core H-series that will be present in Indonesia: ROG Zephyrus Duo 15 Among PC users, gamers are one of the types of users who most use two screens. For this reason Asus is presenting ROG ScreenPad Plus technology to the ROG line through the Zephyrus Duo 15. The Zephyrus Duo 15 is the first gaming laptop in the world to have a 14.1-inch second screen. The screen is specifically designed to support gamers when playing games. ROG ScreenPad Plus is the main feature in Zephyrus Duo 15. The second screen adopts touch screen technology with a resolution of 4K (3840 x 1100 pixels) which is placed between the keyboard and the main screen measuring 15.6 inches. When used, the second screen of Zephyrus Duo 15 which has a special mechanism will be lifted and form an angle of 13 degrees so it is easier to use. This special mechanism is not without reason. In addition to making it easier to use, the raised ROG ScreenPad Plus also provides extra air cavity for optimal cooling. The mechanism called Active Aerodynamic System (AAS) Plus has a function similar to the AAS mechanism in the Zephyrus S. Zephyrus Duo 15 series itself, which still comes with a very compact body, even though this gaming laptop comes with high-class specifications. The Zephyrus Duo 15 is powered by an Intel Core i9 10th Gen processor powered by an NVIDIA GeForce RTX 2080 SUPER graphics chip. 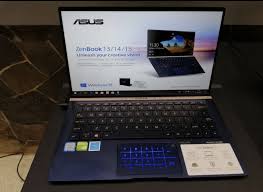 Maximizing the performance of the processor and graphics chip, the Zephyrus Duo 15 is equipped with the best screen with a 4K UHD panel and 100% Adobe RGB color reproduction specifically designed for gamers as well as content creators. Zephyrus Duo 15 screen also supports the G-Sync feature so that the tearing and stuttering effects will certainly not appear when playing games on this gaming laptop. The G-Sync feature can also be turned off to save battery when the Zephyrus Duo 15 thanks to the presence of ROG GPU Switch technology. Thanks to all the superior features presented, Zephyrus Duo 15 is now a flagship for ROG Zephyrus gaming laptops. ROG Strix SCAR 15/17 Like its predecessor, Strix SCAR 15/17 is available for eSport gamers who are hungry for performance. Equipped with an IPS-level screen with a refresh rate of 300Hz, Strix SCAR 15/17 is the best laptop for eSport gamers who want the highest framerate game display.

Thanks to the fast screen, every action in the game can be displayed very clearly and gamers can react faster. Powered by 10th Gen Intel Core i7-10875HK processor, graphics chip up to NVIDIA GeForce RTX 2080 SUPER, and 3200MHz DDR4 RAM, ROG Strix SCAR 15/17 is not only able to bulldoze all existing PC games but can also be used as a multitasking machine. In order to work optimally, the Asus ROG research and development team has established