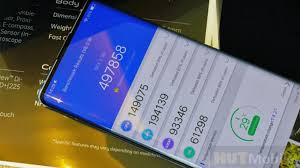 Entering the beginning of June, AnTuTu released a list of the 10 best smartphones throughout May. A row of cellphones is divided into 2 categories, namely the Flagship class and the Mid-range class.

Specifically the Flagship class is again topped by Oppo with the Find X2 Pro variant, which scores 604,123 thanks to the Snapdragon 865 chipset. Oppo also tops the Find X2 with a score of 600,884.

The Oppo flagship phone is also supported by the Snapdragon 865 chipset, but with a different RAM capacity than the Pro version.

As you can see, the list is full of smartphones with Qualcomm's flagship chipsets. There is no Huawei mainstay chipset, namely Kirin 990.

Also read: This Mysterious Mobile Realm That Has a High AnTuTu Score

Meanwhile, the list of 10 smartphones in the Mid-range class looks more diverse. This is because the list is filled with different processors from MediaTek, Qualcomm, Huawei, and Samsung.

Followed by Huawei Nova 7 with the same chipset and RAM capacity. The cellphone scored 385,323. Not only that, Kirin still fulfilled the fourth to sixth position.